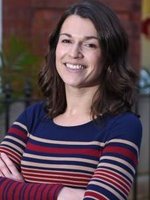 Sian graduated with an MA (hons) from the University of Edinburgh before going on to study Postgraduate Diplomas in Law and Legal Practice with the University of Law (then College of Law). She qualified as a solicitor in 2006 and spent her formative post-qualification years working with international law firm Eversheds in their Commercial Litigation team. Subsequently, Sian went on to specialise in Commercial and Civil Litigation, spending 11 years in private practice as a solicitor and earning recognition in the Legal 500 for her Property Litigation expertise. In 2017 Sian left private practice law and started teaching in Higher Education, becoming a Fellow of the Higher Education Academy. Sian is now a Senior Lecturer in Law teaching at the University of Law, the University of Cumbria and the Open University. 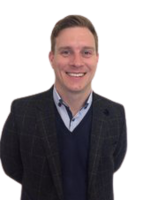 Alex Lives in West Cumbria and works in the nuclear industry in procurement and contract management. He started his career in engineering, gaining Chartered Engineer status, and then moved towards more business and commercial focused roles. Alex enjoys sports, literature, arts and investment as hobbies. He believes a first class education system is a fundamental investment any nation needs to make for its future and as his small contribution to this he wants to support the Learning for Life Trust to continue to be successful and grow our academy over time. 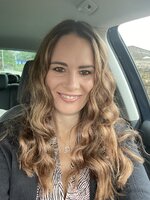 I have an extensive background in working with children, families, schools and other agencies to improve the outcomes of children at risk of harm or in need of support. I have worked for various organisations spanning over 20 years. This enables me to remain child focussed at all times as a Member, to think of the impact on the children of any changes and when the Trust are considering policy and procedure. I have a strong understanding of working within Statutory guidance and of organisations schools can access to enhance the provision they are providing to the children they provide education to each day. 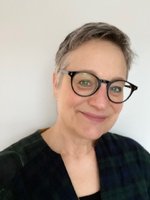 Hannah retired at the end of 2021 after a broad and varied career. She graduated from Durham University with a degree in Engineering Science and worked as a mechanical engineer for a number of years in a range of industries including oil and gas, automotive and construction. She then held a range of other roles including process improvement, quality, training and development, management consultancy, programme management and strategy across a range of industries. She is an experienced and flexible strategic thinker and management professional, with a strong strategic, technical, improvement and people focussed approach to delivering against targets and embedding value adding processes 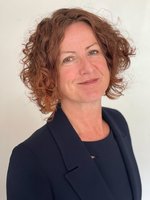 A strong belief that every child should receive the very best education led me into school governance seven years ago. Since then I have held various roles leading to my current position of Chair of the Learning for Life Trust. Over the years I have seen such dedication and commitment from school staff also determined to see their pupils succeed that I’m proud to be a part of a Trust that cares deeply about its pupil and staff alike with a mission to bring out the very best in everybody. My background is in law and I work as General Counsel for a large local business. When not working you are likely to find me with my family walking over the local mountains, pedalling over passes or playing in the lakes. 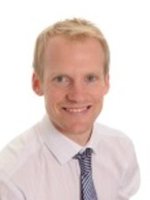 Chris has been working in education since 2004. Following a career in secondary teaching, Chris transitioned into the primary sector before taking up his first headship in 2015. In 2017, Chris joined Fairfield Primary School as the Headteacher and now leads on the development of the Learning for Life Trust. 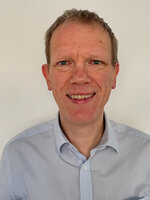 I am a committed trustee who has been with the trust since its inception in 2015. Between 2013 and 2018 I was a school governor for Fairfield primary school, joining the Learning for Life Trust as a trustee from its inception in 2015. I was chair of the Learning for Life trust between 2016-2020. I completed a degree at Durham in physics in the early 90s before starting work at Sellafield for BNFL as a physicist working on instrumentation. For the last 30 years I have been in different companies as the nuclear industry evolved, including BNFL Instruments Ltd, British Nuclear Group Project Services, VT Group and finally Babcock International Ltd (re-branded as Cavendish Nuclear). My early career was in physics; however in the early 2000s I moved into line management and project management roles. More recently I moved to a business management role as Operations manager for Cavendish Nuclear. This role is supplying characterisation services for Sellafield, LLWR and other customers across the UK. I manage a team of physicists, software and systems engineers and provide services and instrument development for (predominantly) the UK Nuclear industry. I have always worked in Cumbria, initially in Whitehaven, then in the South Lakes and since the birth of my daughter in 2008, Cockermouth. 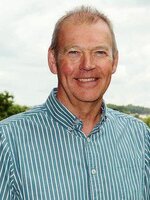 Alex Wilkinson attended both Primary and Secondary School in West Cumbria when it was Cumberland and, following training, became a primary school teacher in our county, a role he was to pursue for 38 years as a class teacher, Deputy Head and Headteacher in a number of primary schools throughout Cumbria. When he retired as headteacher at Fairfield in 2013 he went on to undertake the role of Executive Officer of Cumbria Primary Headteachers Association, an organisation which supports all 280 primary headteachers in our county. This was a role that he enjoyed for more than seven years until retirement beckoned in December 2020. Alex is passionate abut primary education and believes that schools must offer a wide range of opportunities and experiences to ensure that “real” learning takes place. He strongly promotes this broader curriculum through sport, music and outdoor learning. He believes that children should be encouraged to take every opportunity and schools must plan to make this offer a priority. His personal interests are getting outdoors on the fells, skiing, cycling, paddleboarding and gardening and when he is confined to be indoors enjoys playing music on several instruments, reading and making stained glass designs 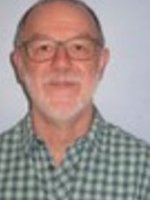 I was born and brought up near Wrexham in North Wales, in a predominantly mining family although my father was unusual in winning a Miners' scholarship to go to Aberystwyth University to study chemistry; my early life was strongly Welsh and after taking my 11+ in the Welsh language, I learned English as a foreign language in Grammar school. I spent six years at university in Manchester, studying Metallurgy and Bio-Medical engineering and emerged in 1978 with a First degree, an MSc and a PhD. I started work first with United Kingdom Atomic Energy Authority as a research scientist, working on the metallurgical problems of several nuclear reactor systems, moving gradually to undertaking large-scale structural testing of components and structures. The evolution of the UK Nuclear industry meant changing companies several times, including the privatised AEA Technology, BNFL, BNFL Nexia Solutions and finally the Government-owned, commercially-operated National Nuclear Laboratory (NNL). While my early career was in direct science and engineering, I inevitably moved to more project and resource management positions, switching between them several times, and taking in Commercial and Business development roles. I worked for some time in Mergers and Aquistions but in the last 5 years of work I was NNL's Strategy and Innovation Director, sitting on the Main Board (NNL is a £90M commercial business). In this role I had a small team charged with looking outward to help develop NNL's medium and long-term strategy on market development, key research areas and key partnerships; in the area of innovation, my team managed a £1M per annum investment fund used to provide pump-priming and startup funding to new technologies. 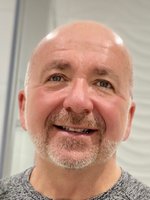 Brendon has transitioned from a career in banking throughout the UK undertaking various roles leading teams specialising in Project Management, Conduct and Operational Risk and Financial Crime. Now retired, Brendon has been involved in a number of voluntary activities over the years. He was one of the youngest Hospice movement treasurers at the age of 26 at Rossendale Hospice and he was treasurer of BASICS (British Association for Immediate Care), in Allerdale. Brendon is a past Chairman of the Cockermouth Round Table and Cockermouth 41 Club and he remains a member of the 41 Club. He is also a past Governor of St Joseph’s Primary School and Cockermouth Secondary School and is currently Chairman of the Board at the West Cumbria Hospice at Home. Brendon has a passion for making a positive difference in every walk of life and is keen to see the Trust grow and facilitate an improved educational environment for all concerned. 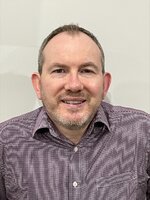 John has worked in Accountancy since 1990 and is currently employed by a local Chartered Accountants’ holding the position of Client Portfolio Manager. He advises on a wide range of clients from small owner manager business to companies with a turnover of several million pounds and has considerable experience in acting for business operating within the construction and property industries, hotels, the retail sector, tourism-based industries, charities, and a previous Multi Acadamy Trust. He also serves as a local Parish Clerk where he has learned an understanding on how local governance operates. John has served as a school governor between 2017 and 2021 , before joining the Trust board in an associate capacity for the audit and finance committee. As a local who has lived in the Cockermouth area all his life, he believes it is important to support local Charities, groups and institutions and has taken great interest in the growth and development of the Academy Trust 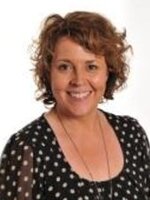 Carolyn has been the School Business Manager at Fairfield since 2009, working across both Fairfield Infant and Fairfield Junior Schools prior to the amalgamation to Fairfield Primary School in 2013. Carolyn was responsible business element of the academisation and amalgamation of the two schools forming Fairfield Primary School and the Learning for Life Trust. In October 2014 Carolyn was awarded the title of Primary School Business Manager of the Year at the NASBM awards ceremony for her dedication to the profession. Carolyn supports the leadership and management of the school and brings a business perspective to decision making and strategic planning and advises the trust and local governing body on school business matters. Carolyn is a member of the Institute of School Business Leaders and the Cumbria Association of School Business Administration & Management. Carolyn has vast experience of managing the business element of schools as an academy and multi academy trust and has always strived to develop operations whilst meeting all of the requirements of the Academy Trust Handbook, ESFA standards and Government returns. 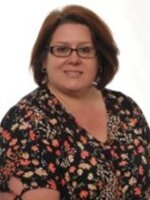 Tracey was initially a staff governor for Fairfield Infants School and as a member of the Curriculum Committee she took on the role of clerk, liaising with the clerk to the Local Governing Body at the time. Following the amalgamation of the Infant and Junior schools, she stepped down from her role as staff governor. In October 2017, she was successful in securing the role of clerk to the Board of Trustees and the Local Governing Board, and more recently to the Audit and Finance Committee. Tracey now works closely with the Trust Board, Headteacher, LGB and all committee chairs to advise, organize and support meetings, ensure effective communication and sharing of information across committees, advise on compliance requirements in line with the Academy Trust Handbook, assist with recruitment and induction of new Trustees and Governors and identify training needs to ensure the Board can fulfill its four core functions of governance effectively. She has recently successfully completed the Development for Clerks course and is passionate about continuing to develop governance practices within the Trust. 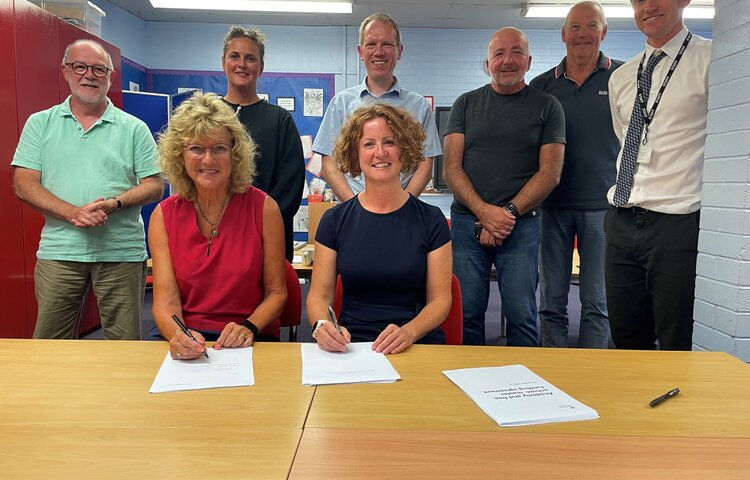 Broughton Primary to officially join the Trust on September 1st